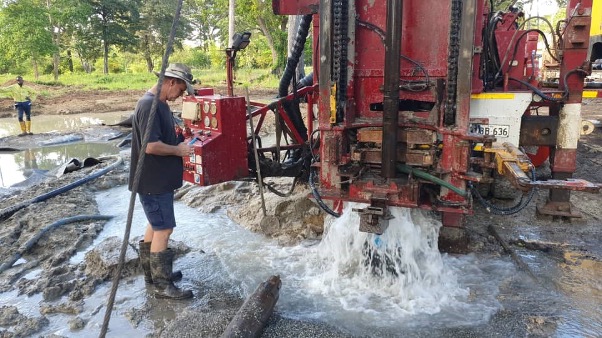 Daru township will soon have access to clean water supply thanks to an initiative sponsored by PNG Sustainable Development Program (SDP) in close consultation with Water PNG.

Access to clean water on Daru has been a growing problem over recent years. “The main problem we have is the pipes are deteriorating, resulting in pipe bursts and leakages,” said Jonathan Mathew, who has worked for Water PNG (formerly Water Board) on Daru for 30 years. “When a pipe breaks, the whole town is out of water. But now with SDP’s help, these problems are being addressed and we will be able to supply the community with clean water.”

When SDP signed its MOU with Water PNG back in 2021, the intention was to repair the existing system which sourced water from U’ume river and pumped under the ocean to Daru where it was filtered and piped to community outlets.

However, detailed engineering investigations revealed that fixing the old system was not the best option. The 16-kilometre undersea pipeline was seriously corroded and leaked seawater. Furthermore, the water was pumped by an obsolete diesel-powered system that was unreliable and cost a lot to run.

The situation called for some fresh thinking, innovative and modern technology. This prompted SDP and IAI (its contracting partner) to investigate sourcing water on Daru from deep underground aquifers and processing it through a state-of-the-art desalination plant powered by a modern, industrial scale solar generating system.

An 85-metre test well was dug on SDP’s land near the Daru airport. The results exceeded all expectations when over 200,000 litres of relatively clean water were pumped each day over a continuous four-day test period.

Additional production wells were then sunk and water tests were carried out to determine specific design features for the desalination plant which will be powered by a 1 MW solar system capable of supplying 1.5 million kWh annually (in keeping with a MOU signed with the Fly River Provincial Government). The solar farm and its sophisticated battery storage and control system is now operational and soon to be connected to the desalination plant.“This revolutionary project will give a lot of hope to the people of Western Province,” said Godfrey Bongomin, WASH Programme Manager for World Vision in Daru. “Daru has been suffering because of water scarcity and water quality. This project will definitely make a big difference and we are excited by the rapid progress and teamwork getting pipes laid so clean water can start to flow. I believe this project will make a big, big difference in the lives of people down in Daru.”

“I am very happy that SDP is coming to help in this way. We have serious underlying disease issues here and having access to clean water will be a great help to the whole community. Thank you, SDP.”

Work is now underway to connect SDP’s desalination plant to Water PNG’s town water supply. These efforts are being undertaken in partnership with the local community. 60 local men and women are digging the 2-kilometer trench for the connecting pipeline – it’s a wonderful joint effort actively supported by Water PNG.

The District Planner and South Fly Projects Manager, Peter Nagai feels this clean water project is good for the district as it will help solve an important issue. “The project will move Daru towards a modern town,” he said. On behalf of the administration, he thanked SDP, Water PNG and other stakeholders involved in this project. “This project is really good for South Fly and the people of Western Province,” he said.

Douglas Papa, a senior citizen in Daru, is very excited about the project. “A lack of clean water is a recipe for disaster. This project is something for us as a community to hold SDP in high esteem because, when the project is complete, we can have clean water all day, every day. And that is not all…. projects like this provide employment for our people which is helping put food on the table. So, thank you,” said Mr Papa.

The Chairman of Water PNG, Ambassador Aiwa Olmi is a strong supporter of this partnership with SDP. “This is a good example of collaboration between a state-owned enterprise and an impact investor such as SDP. It demonstrates how creating a sense of ownership amongst key stakeholders can improve a key public service where it is really needed to benefit the people we are here to serve. We look forward to further future joint efforts in Western Province. This is a model to be repeated in other parts of PNG with similar situations to Daru.”

The Daru Clean Water Project is expected to be operational by the end of this year.