“We are grateful for these mosquito nets for our soldiers on border operations especially for COVID-19, but it will be a mistake to forget about malaria and other mosquito-borne diseases that have been killing a lot of people over the years. So, thank you SDP. This will greatly support our soldiers manning the border provinces,” said Captain Biau.

SDP has partnered with RAM since 2018 to deliver mosquito nets and malaria drugs, and to support health staff in Western Province.

“With SDP supporting Western Province, we have been able to focus on other remote parts of the country,” said Tim Freeman, RAM Programme Manager.

“We look forward to a continued partnership with SDP as their funding is an enormous help in expanding our coverage elsewhere.”

SDP, through its Aerial Health Patrols (AHP) team  is also providing support for the police and military personnel who are in Balimo, Middle Fly District.

They have conducted COVID-19 training and infection control for these police and military personnel who have been deployed to Balimo as part of the State of Emergency (SoE) response. These law enforcers said they appreciate the training and now understand so much more about these health matters. They said they will be sharing this information with their colleagues in Kiunga.

The Balimo Hospital staff have also received this training.

Last month, the AHP team in collaboration with the Balimo Hospital and District Health staff established an outdoor Respiratory Triage Clinic at the Balimo Hospital. All visitors and outpatients arriving at the hospital are checked, and also receive personal infection control awareness. This clinic was put in place to minimise the pressure on the Balimo Hospital.

SDP-AHP Patrol Manager, Ross Baibuni explains the processes that are currently in place.

“When all patients first come through the hospital gate, they are met by AHP’s WASH team who run them through the six steps of hand washing technique. They are given a bar of soap, a face mask, and a set of seven information leaflets on COVID-19. The patients are then sent to the Triage Clinic where they are screened for any flu-like symptoms.”

He said those who have flu-like symptoms go through a second screening, their history is collected and then they are given a symptomatic treatment, and more awareness on COVID-19 before they are sent home. For those who are screened as severe cases will be admitted immediately.  “Fortunately, we have not had to admit anyone yet,” said Mr. Baibuni. 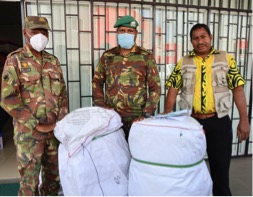 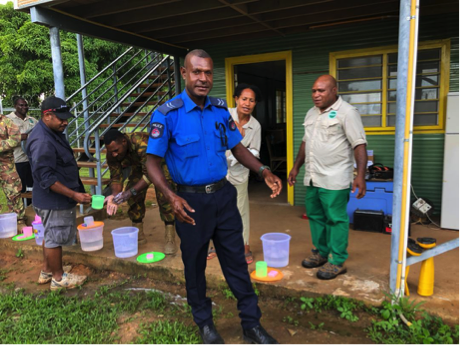 Equipping the law enforcers in Balimo with information on COVID-19 and infection control.